Final Club night of the year

This week was the final Club night for 2021.

In the Junior club, the final night of term 4 saw the conclusion of a 6 round junior blitz tournament. All participants received prizes with the top two players in each age group receiving medals. In the 10 and over event, the gold medal was won by Lukas Boyd with 6/6, and the silver medal went to Lucas Thompson with 4/6. In the under 10 event, first place and gold medal was won by seven year old Orlando Liu (5/6), with his sister Charlotte taking the silver. Congratulations! See photos below. 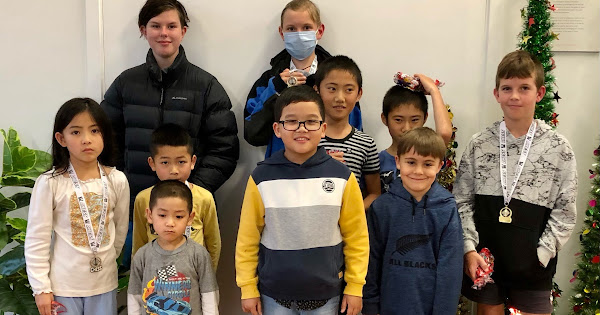 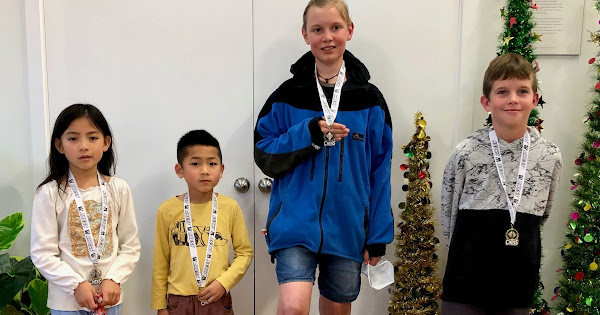 For the seniors, a summary of the all the prizewinners for the tournaments played this year can be found here. Like most  Clubs around the country, COVID has had a big impact on our over-the-board tournaments this year, with several tournaments not able to be played, including our Club Championships, and our Open Junior Championship. However, there was still plenty of completed tournaments, with some great Chess (check out some of our website posts and games!). Congratulations to Stewart Holdaway who took out the Leo Eichholtz Board for rapid play (25m + 5s), and to Guy Burns, David Paul and Ross Jackson who each shared the Flora Paul Memorial Trophy for the best Kāpiti player at this year’s successful Open Kāpiti Rapid. And special mention to Gordon Lyall who took out the rest of those tournaments that were able to be played this year, and who also picks up the Glenys Memorial Trophy for the player with the highest overall Grand Prix points for the year. A delayed formal prizegiving is likely to be planned for next year’s AGM.

The Club is now in recess until next year. Keep an eye out on our website for details on when we open in 2022. Happy holidays all.

With the weather warming, some members enjoyed some al fresco Chess this week along with a meal and drink at a local pub. Nice! 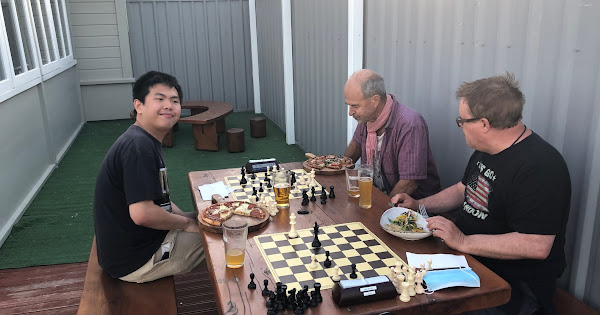 OTB play to resume next week!

Members and parents have voted to resume Over-the-board Chess next week on Tuesday 26th October. Both the Junior Club, starting at 6:30pm, and the Senior Club starting at 7:30pm. Our online nights will still continue, but move to Fridays at 7:30pm.

While this will be welcome for many who’ve been missing OTB play, the Club is playing under COVID Alert Level 2 conditions. Players and parents coming along are asked to respect the following rules:

This week we say goodbye to long-time member and friend of the Club Rick Lowe who sadly passed away this week. 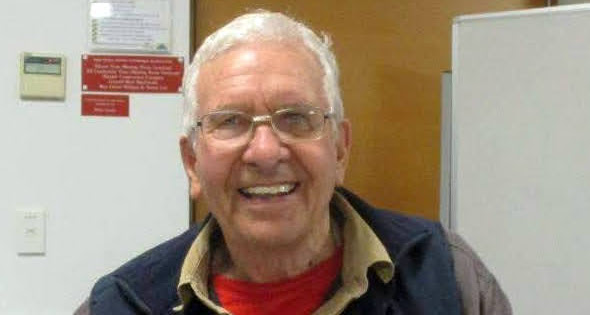 He will be remembered for his fun, sometimes cheeky spirit and his genuine love of the game – and of course for his amazing chess-themed car. He will be missed by all who knew him at the Club. 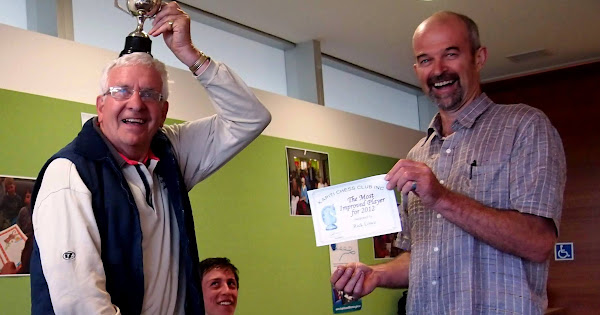 While COVID continued to keep NZ Chess Clubs online during September 2021, this was one game played during one of the Kāpiti Chess Club’s online arenas. Black, using his role as the Club website person, to somewhat indulgently show off a rare win against Ross, albeit under a casual 10+5 online format.

The Club continues to meet online due to COVID, with weekly 10m+5m ‘Arenas’ hosted on the Lichess site. (lichess.org/team/kapiti-chess-club). The current increased Alert Levels have also impacted on the Club’s annual Open Junior and School Championship, which has now been deferred to a date TBC later in the year.

Congratulations to Stewart, Ross and Lars who have variously taken out the online Arena ‘gold cups’ over the last four or five weeks. While the shorter online time format does always provide for  high quality games, many can still be entertaining.  Here’s a recent example.

This is a game from one of the Club’s online meetings while OTB meetings were suspended due to COVID in the second half of 2021. The time format of 10 m + 5 s does not always provide for high quality games, but they can be entertaining none the less. In this game Geoffrey is able to get a good kingside attack going, again from the London, eventually ripping open the Black King’s defenses and ending with a nice mate.

With OTB chess temporarily suspended again due to COVID, this was a game from one of the Club’s online Arenas, played with a 10m + 5s time control. Geoffrey tries out his new version of the the London with 6. f3, and 7. g4 followed by a nice kingside storm. While the advantage alternated between both players several times, as is often the case in this  format, White’s kingside attack prevailed, ending with a nice mate finish.

With the return of increased COVD Alert Levels this week, over-the-board chess was cancelled, and an online meeting was held on Friday. The Kāpiti Chess Club will continue to meet online until COVID Alert Levels return to Level 1. You can join us on Tuesdays at 7:30 pm here: http://lichess.org/team/kapiti-chess-club.

This week saw the second of three nights played over the year for the Club’s Blitz Cup. Results from the night saw Gordon Lyall take out first place on 6, followed by David Paul on 5, and Ross Jackson and Guy Burns on 4½. Results and standings here. Combining these results with Series One played back in June, Gordon currently leads on 13½, just a nose ahead of David on 13, followed by Geoffrey on 9½ and Ross on 9. The third and deciding night will be played later in the year in November.