Chess for 2017 is over, rover. We finished the year with prize-giving and a shared meal. Full detailed results for 2017 can be found Here.
We meet next in 2018 on the first Tuesday in February, the 6th…see you then. 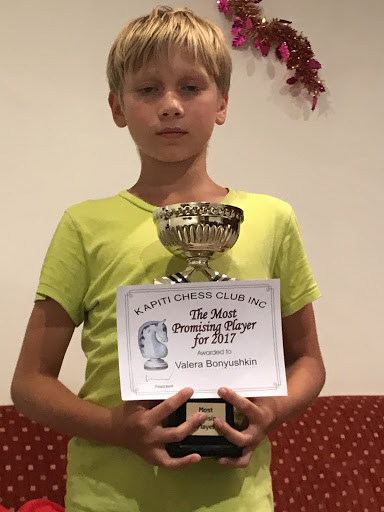 All 2017 Championship games are now finished–full and final results Here.

Last week we were able to announce the Winner of the A Grade with one round remaining.  Though not affecting the top position, the final round saw Gordon and Alan agreeing to a draw and David Paul beating John Whibley, the points gained helped both players, to elevate themselves into a share of =2nd.

The B/C grades however went down to the wire with the final game of the tournament deciding who would be the minor grade champions.  The top two (Mark Summers and Rick Lowe) were both on 10 points.  Would there be an outright leader of the pack or was it going to be shared. Mark S played Mark W last week and his loss helped Rick join him at the top.  The roles were reversed this week with Rick having the tougher of the two matches playing Mark W and Mark S  paired against Rose Kingston.  Results were Mark S proved to be too strong for Rose and like Mark S last week, Rick found Mark Woodwood too strong.   These results left young Mark Summers on top alone with 11 points and Rick coming in as runner-up on 10 points. As this tournament was a combined B/C Grade, Mark as the highest C grade player wins the C Grade Champions Trophy and Rick as the highest placed B Grade player, takes home the B Grade Champions Trophy.

Our congratulations to both Mark Summers and Rick Lowe on their success this year.

Allowing 2 weeks for all trophies to be engraved, our last club night and prize giving will be on Tuesday 19 December 2017.  As tradition calls, all members are invited to come along (bring a friend or partner) and if possible a plate of something for all to share. After prizes and awards are distributed, again, following on recent tradition – The new Club Champion will attempt to get a credible score in playing a simultaneous match against all wishing to take part. Next Tuesday (12 Dec) will be a general night where those turning up can take part in a friendly mini tournament of blitz.

After a gruelling 3 months of weekly rounds, last week saw the top two players (Alan and Gordon) play their penultimate round against the top two rated players. With a 1.5 pt  deficit, Gordon had to win to keep his hopes alive whilst Alan had the luxury of knowing a draw would be sufficient to give him an unbeatable 11.5 points. With one game left to play. Given what was at stake both players avoided any opening fireworks though Gordon hoped to catch David off guard with the Polish (b4) opening.
Alans’ main plan was to ensure a balanced game and not go into any risky trades.  Midway through the night, Alan felt he had achieved his aim of entering in to an end game that had something for both players. which in such unclear positions an offer of a draw has more chance of being successful.   Indeed a draw was offered and after some thought, Ross accepted.
In the other match a hard battle was being fought out with both Gordon and David giving no quarter.   Whilst both players were fighting to control/defend the centre, a King side attack by David, advancing his “h” pawn to open up Gordons defence around his King, proved to be the game breaker.  A mistake by Gordon giving up control of the light squares around his King allowed David to give check with his Queen on the back rank, with the end come a few moves later.

After 13 Rounds with a score of 11.5 pts from 13 – Alan Winfield is the winner of the Kapiti Chess Club Championship.

Like the A Grade, the B/C Championship has also been going on for 3 months however with 1 round left to play, no clear winner in either grade has yet emerged.
Last week saw the tournament leader Mark Summers, drawn against Mark Woodwood.  A serious blunder was made by Mark S (touching a piece then seeking to move another).  A polite reminder of  the rules from his opponent corrected the action, however it seemed to affect Mark S and he want on to lose the game.    Though wins are always nice to get, it is good to remember also, that much can be learned from the games we lose. As disappointed as Mark S may be, all is not lost.  In our final games of the series next week, Rick, whose win over Savanah put him level with Mark S on 10 pts also has to get past Mark W.   A good performance against Rose may see him crowned B Grade Champion at his first attempt.

In the A Grade Alan reached 11 points out of 12 with a win over Sean (By default) and after a tense battle, Gordon emerged victorious over Ross.  This places Gordon on 9.5 and Ross remaining on 8.5. (Their game is shown below).  With only two rounds left Gordon is the only player who can catch Alan albeit he needs to win both his games against (Yes you guessed it – against Alan and David Paul).  Alans other match is against Ross, so neither of the top two have easy games to finish on.  During the second series Gordon has matched Alan game for game however Alan’s stronger showing in Series 1 has given him a strong edge with needing only a draw in either game to win or share the Club Championship.

In the joint B and C Grade Tournament  Mark Summers has secured the C Grade Championship with a win (By Default) over Mark Woodwood.  Rick Lowe had a most fortunate win over Rose who unfortunately overlooked opportunities to checkmate and to win Ricks Queen to end the game.    The pressures of Chess sometimes blinds us all !!! In the other match up an evenly paced game saw Valera and Savanah agree to a draw which advanced them both a little higher on the table.  Well done both of you!!

Last week saw a match up in the Club Championship between the top two rated players (Ross and David).  After Alan’s win against John Whibley, putting him on 10 points overall, both Ross on 7.5 and David, our current Club Champion on 8, were in need of a win to keep their hopes of winning the Championship alive.
Unfortunately for David, his bad run of form continued, and with 3 consecutive losses his chances of defending his crown are over.

In the third pairing, Gordon Lyall played Alistair McGowan in an entertaining match.   With neither player gaining a significant advantage in the early stages, both had winning chances which were missed over the board.  Unfortunately for Alistair, whilst pushing hard on the Queen side, he overlooked a rook sacrifice which if taken would be followed by checkmate.
After a couple of moves, a gracious resignation from Alistair saw Gordon take the spoils and join Ross in =2nd place.

In the B/C Tourney Rick lost his opportunity to join Mark Summers at the top[ of the table with a loss to Mark Woodwood.   Rose Kingston won her match against Valera and with Savanah not attending Mark Summers was granted a Bye.With three rounds to go is neck and neck for the B/C grades.

With absentees and some games having been played in advance, the only match up in the Club Championship was between the top two players (David & Alan) both of whom were undefeated after the 1st series. Both players expected a tough match as their previous games have been fairly close.   David playing White opened with e4 and Alan responded with the Sicilian Defence.

White took the early initiative and Black took some risk leaving his King in the centre.  Unfortunately for White, an oversight when pressing on the Queen side, allowed Black to counter with an exceptional move on the King side which ultimately led to white either losing a piece or being checkmated. Hoping for Black to commit a similar error White continued.  The final end game was a very strange sight which saw Black exchange 2 Queens for 2 Rooks and win with 2 Rooks and Bishop v Whites lone Queen.
The win puts Alan 1 point ahead of the field with 4 games left to play.

In the B/C Tourney Rick and Mark S remain at the top of the table with wins over Savanah and Rose respectively.  Mark W kept up the pressure by beating Velera.