A field of 44 players from 16 schools across Wellington to Levin competed in the third running of the annual Kāpiti Junior Chess Championship played on Saturday 13th August at Raumati Beach School in Paraparaumu. This was a record turnout for this event.

Congratulations to top seed Ryan Winter who took out the Championship Open division with an impressive unbeaten 6 wins from 6.  Along with Ryan, the Open division featured a strong field this year – including current NZ junior champion Ollie Archer, last year’s NZ junior champion Josh Langford, and previous Kāpiti Junior Open winner Kayden Loke. All three traded a win and a loss against each other, to go with a loss to Ryan and wins in their other rounds, to finish second equal on 4 points. But after tie-breaks, Kayden took out the silver medal, and Josh the bronze.

In the Schools event, Joy Ulm (Aotea College) was an impressive winner in the Secondary grade, unbeaten with 6 points from 6, ahead of Kushal Chatla (HIBS) and Ethan Hill (Tawa College). In the Intermediate section, Eashan Maveram (Johnsonville School) had just one loss to take out the gold medal, with Roy Mackay (Levin Intermediate) taking out the silver on tie-break ahead of Zachary He (Waterloo School). In the primary section, Lucas Qu (Churton Park) repeated his win from 2020 to take out another the gold medal, with silver going to Alex Chen (Waterloo School) and bronze to Kāpiti Junior Club member Devin Direen (Paraparaumu Beach School).

The Kāpiti Chess Club School Trophy, awarded to the top performing Kāpiti or Horowhenua school, was retained for a second year by Levin Intermediate narrowly edging out Te Ra School, 13 points to 12½. In third place was Waterloo School.

Thanks to all the players and parents for a fantastic day of Chess, and to organiser and director Gordon Lyall, along with others who helped out, to make the day run smoothly. 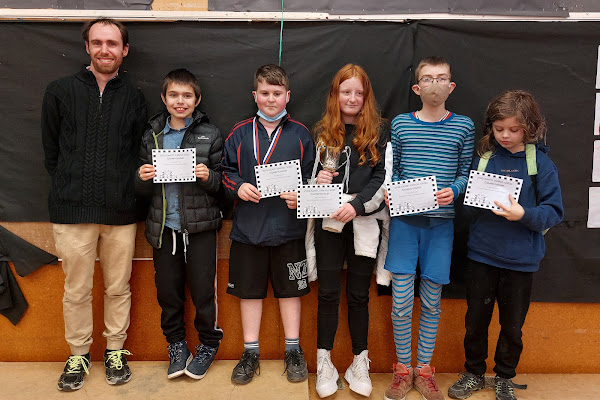 Full results from the day can be found here:

Photos and videos from the day including all the prize-winners can be found here.

The final rounds of the (new in 2022) Mid-year Rapid tournament were played this week. Going into Round 6, Geoffrey Gunawan needed a win against Andrew Brockway, which he managed – but also needed recent newcomer to the Club, Michael Sole, to prevail against  Levi Paxton to deny Levi of the tournament win, and to secure tournament victory for himself. Congratulations Geoffrey!  Final tournament results here.

This Saturday is the premier Junior event on our Club’s calendar – The Kāpiti Junior Open and Schools Championship. It’s just $20 for a great day of fun and competition. Interest has been great so far, and there is still time to enter.  See details here.

Club Captain, Geoffrey Gunawan gave a simul last week at the junior club. He played 9 of the juniors, and a prize was awarded to Devin, who held out the longest. The night was a great success with the juniors enjoying the challenge. More photos from the night can be found here. 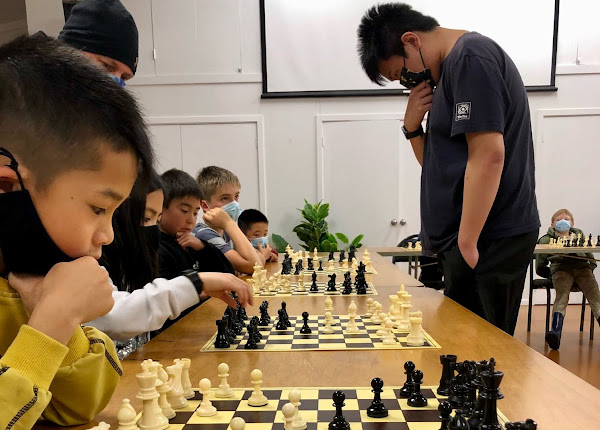 Armageddon Chess is variant of rapid chess where if there is a draw, Black wins. As compensation, White gets a little more time on their clock, for example, 5 minutes versus 4 minutes with no increment  is typical. It’s often used as a tie-breaker in tournaments. The Club held its first ever Armageddon night this week, which was great fun. After a double round robin Geoffrey and Gordon came out as joint winners. Results here.

Congratulations also this week to Oscar, Charlotte & Orlando Liu  (front row in photo) and Jed Le Boutillier  (back row) who were awarded their NZCF Level 2 (Knight) certificates and badges.

Congratulations also to Gordon Lyall who has successfully completed training to become an internationally certified Chess trainer. The FIDE Instructor or FI title is awarded based on rating, student performance, experience or special achievements,  trainer & related professional skill, and a written exam. The title will be officially awarded at the FIDE Council Meeting on 4 August 2022. Great news for our Junior Club which he and his wife Andrea run each week.

This week was the final night of the Term 2 Junior tournament, followed by prizegiving. Congratulations to the winners (from left to right in the photo):  Jingwei Xu (6) with the Silver medal, Devin Direen (7) with Gold, and  Tumuka Martin (10) with Bronze. 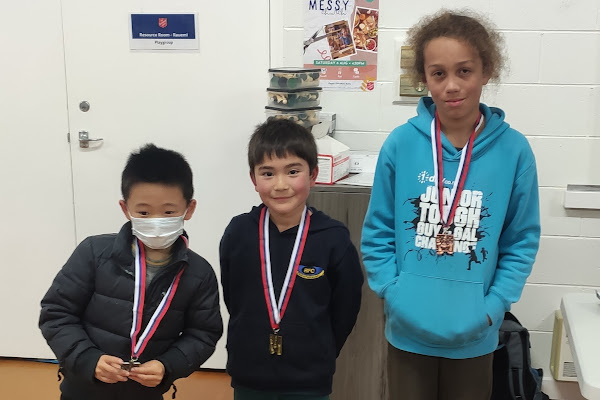 Congratulations also to all our NZCF Pawn and Knight badge certificate and badge winners below. 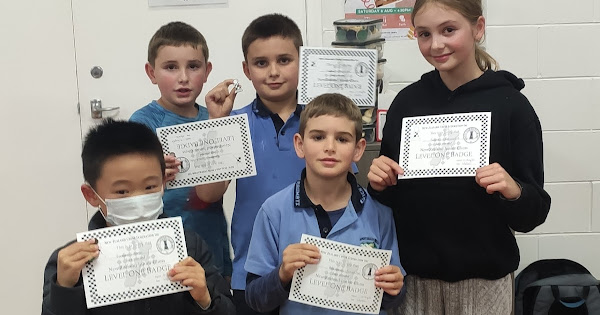 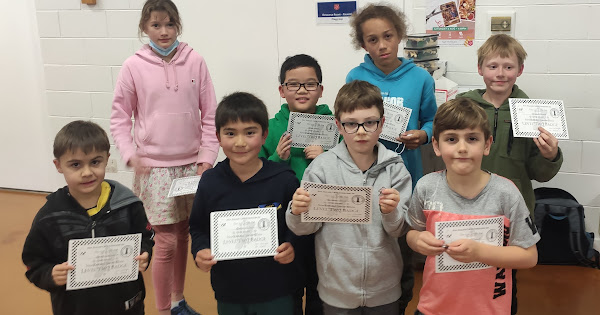 In the senior club, it was a night of ‘Hand and Brain’. Players pair up, one acting as ‘brain’ and one as ‘hand’. The brain says the name of a piece and the hand has to decide where to move it to. A really fun way to play as teams, with different pairings with different combinations of playing styles making for some really fun and interesting Chess.

Next week will be a night of Armageddon chess.

The end of term junior tournament got under way last night. Elane, Joni and Devin lead with 2.5 points from 3 at the half-way stage. They are closely followed by Jinwei, Tumaka & Ryan with 2. The competition concludes next week.

Meanwhile in the seniors, Levi Paxton took out the Winter Cup for 2022, for his second tournament win of the year after beating Ross Jackson in the final round. Gordon Lyall was second and David Scott was third. See the full results here.

This week was test time again in the Junior Club.  The New Zealand Chess Federation has a popular series of four written tests for juniors, from the beginner pawn level, through to knight, bishop and rook levels.  A different badge and certificate is awarded as the pupil passes each test (see picture below). This week 12 kids sat their knight test, while 6 sat their pawn test. Good luck! Meanwhile in the senior club, we held a mini one-night tournament of 10+5, with Gordon Lyall coming out on top. Next week will be the final deciding round of the Winter Cup. 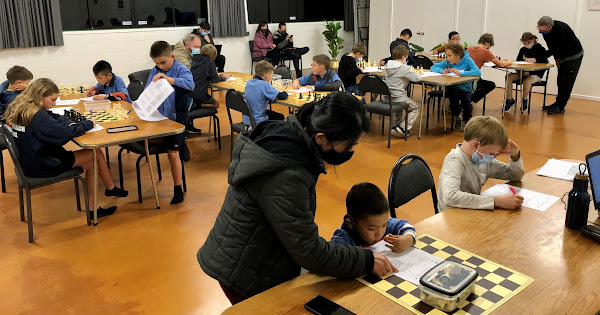 The biggest Chess event for kids on the Kāpiti Coast returns in August.

The Kāpiti Chess Club is proud to host the 2022 Kāpiti Junior Chess Championship on Saturday 13th August. This is a great day for primary and college kids of all ages and abilities, and a chance to see which school in the region has the best young chess players.

Individual medals prizes will be awarded in four divisions:

In addition, and a trophy will go to the leading Kāpiti or Horowhenua school.

It’s being held at Raumati Beach School, 26-34 Raumati Road, Raumati Beach.
Entry is just $20 for a great day of fun and competition in one of the oldest and best games in the world.

Find out out more, including how to enter, in the flyer below. Hope to see you there!

Rounds 5 and 6 of the Winter Cup played this week. After six rounds, Levi Paxton leads on 4½, followed by David Scott on 4 and Gordon Lyall on 3½. Both Levi and David held Gordon to draws, while Levi had a win over Geoffrey Gunawan. All three are in with a chance to win the Cup  for 2022, which will be decided next week. Current standings here.  Meanwhile, the Junior Club continues to have good turnouts each week, and there looks to be plenty of interest in Chess amongst kids in the Kāpiti region. Next week it will be NZCF badge test time again!

The 28th annual Kāpiti Rapid was held in Paraparaumu on Saturday 28th May. The tournament drew a good field of 40 players, including several titled players and former New Zealand champions. A relatively strong field compared with previous years, with an average rating amongst rated players of 1670. The tournament was played over 6 rounds under a 25 m + 5s time format.

Congratulations to FM Ben Hague who took out the open grade with an unbeaten 5½ from 6, with IM Russell Dive and Michael Sole 2nd= on 5. This is the second time Ben has won the tournament. 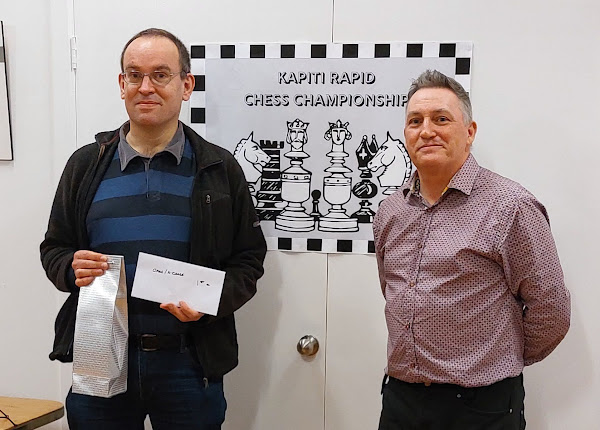 The crucial game was the final round clash between Ben Hague and Anthony Ker, both going into the round unbeaten on 4½, having dropped just ½ a point in previous rounds to Russell Dive. A win or a draw for either would secure the tournament. This was not going to be a tame draw, however, as Ben opened with a Trompowsky and was able to secure and convert an early space advantage for the win.  See game here.

In the B grade (1400 to 1800), Josh Langford was the comfortable winner on 4½ (4th= overall), his only loss to tournament winner Ben Hague. Nicolas Winsley also had a good day securing second place in the B grade with 4 from 6. Taking out the C grade (under 1400) was  Cohen Young on 3½, with Jun Lee and Lucas Qu equal second on 3.

The depth, performance and future promise of the juniors in the field was again evident. In the 14 and over age group, Thomas Van der Hoorn, Josh Langford and Nicolas Winsley took out the medals, all finishing in the top 8 (photo below). Current Olympiad team member and second at this year’s Congress, Felix Xie  was not far behind, perhaps a little unlucky with a tougher draw. In the under 14 group, current  joint New Zealand junior champion Ollie Archer won the gold medal ahead of Lucas Qu and Mavram Easham (photo below).

The day was well-organised and run by Club President Gordon Lyall, with the great help of his wife Andrea, and support from Club members. Thanks to all who attended.

This year’s tournament flyer is here.