With many players in contention, there was plenty to play for in this week’s crucial Rounds 5 and 6 of the Leo Eichholtz tournament.  Ross Jackson who had led unbeaten after 4 rounds, only managed half a point this week, but that was still enough to keep him a nose in front at the end of the night. Geoffrey Gunawan benefitted from a time-challenged Ross in Round 5, but was not able to add to his points in Round 6 against Ross’s Wellington clubmate Andrew Brockway. However,  Gordon Lyall was back to winning form picking up 2 points from the night to sit in second place with Geoffrey on 4 points. But only after a tense battle in Round 5 against last year’s winner Stewart Holdaway, who sits close behind the leading pack on 3½ points (photo below).  With the leading four players in real contention, and a further two players with an outside chance, the final deciding  rounds next week promise to be very exciting. Full results of the night can be found here. 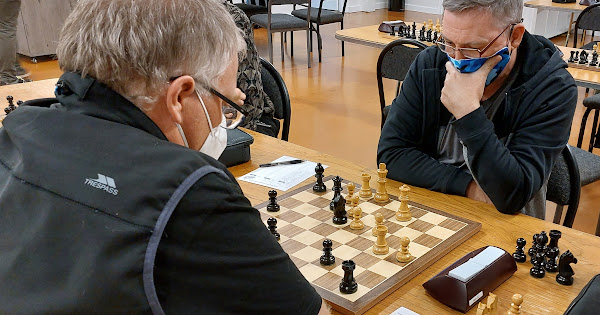