Kāpiti chess winds up for the year

With a perfect night, and in the picturesque semi-rural setting of Club member Brandon’s home, Kāpiti Chess Club members with friends and family celebrated the end of the year with a memorable night of food, drink, prizegiving and social chess.

The evening kicked off with end of year prizegiving. We were lucky to only have one of our trophies not able to be awarded this year due to Covid. Congratulations to all the winners and in particular to our Championship winners, Gordon Lyall in the A Grade, Geoffrey Gunawan in the B Grade, and Hamish Lester in the C Grade. Also to Geoffrey Gunawan for taking out the Grand Prix Glenys Mills Memorial Rook for best consistent performance over the year.

With the formalities  out of the way, everyone then quickly settled into a great evening of eating, drinking and relaxed chess of various levels of quality, which went on well into the beautiful windless Kāpiti evening.

The Club has now finished for the year, and will resume again on 9 February 2021. Look forward to seeing you all then.

The Kāpiti Junior Chess Championship, played in Paraparaumu on Saturday 12th December, saw players representing 22 schools from Wellington to Levin, compete across 4 divisions. In the premier Open Division, top seed Ryan Winter (Wellington College) suffered a surprise defeat in round 1 to Josh Langford (Wellington College). Former Paraparaumu College student, Geoffrey Gunawan, held the joint lead at the halfway stage but was not able to carry his early momentum into the later rounds. Going into the 6th and final round, Henry Zaslow (Onslow College) had a clear half point lead but had to settle for third place, after losing a tough battle to Kayden Loke who took the title on tie-break, from Ryan Winter. Kayden was unbeaten throughout the tournament scoring 3 wins and 3 draws from his 6 games. Three games here: Loke v Winter, van der Hoorn v Loke, and Loke v Laslow.

In the School event, Vincent Lou (HIBS) was an impressive winner in the Secondary grade, with 5 points from 6, ahead of Hamish Lester (Paraparaumu College) and Mia Vachon (Marsden Collegiate School). In the Intermediate section, Sravya Moparthi (Hutt Intermediate) had a perfect score going into the last round, and despite a loss playing Black against Youan Salt (Levin Intermediate), she held on to win the section on tie-break, from Youan in second and Ryan Goodall (Levin Intermediate) taking third place. The primary section had the largest field of all the grades and saw Lucas Qu (Churton Park) win the gold medal with silver going to Max Wang (Johnsonville School) and bronze to William Ding (Eastern Hutt School).

The Kāpiti Chess Club School Trophy, awarded to the top performing Kāpiti Horowhenua school, was comprehensively won by Levin Intermediate who had a strong tournament.

Gordon Lyall makes it a threepeat and retains the Club Champion title and Tom Powell Trophy he won in 2018.  He secured the A grade title with a final round win this week against David Paul (See game here). Ross Jackson and Geoffrey Gunawan also had wins to retain second and third spots respectively (See Geoffrey’s game here). As the highest placed player rated under 1600, Geoffrey also takes out the B Grade champion title and keeps hold of the Ab Borren Trophy he won last year.  Hamish Lester takes the C Grade and Gufeld Trophy. Congratulations to all. See here for the full results and standings.

A reminder that the Club is hosting the Kāpiti Junior Chess Championship this Saturday. This is the ideal chess event for all junior playing levels, with an Open section accommodating elite juniors, along with a Schools section with three grades. It’s not too late to enter, and promises to be a fun day. Details about the event and how to enter are here.

This was our last week of formal Club chess for the year. Next week is prizegiving, and a relaxed final night of social chess over some food and drink. 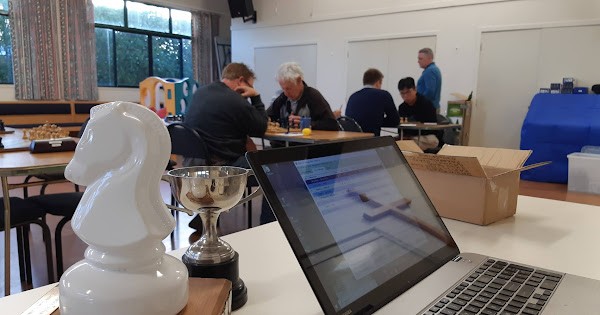 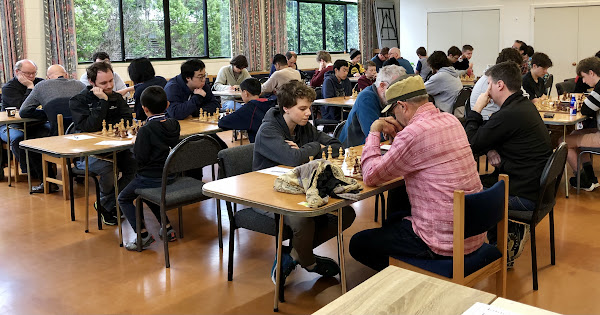 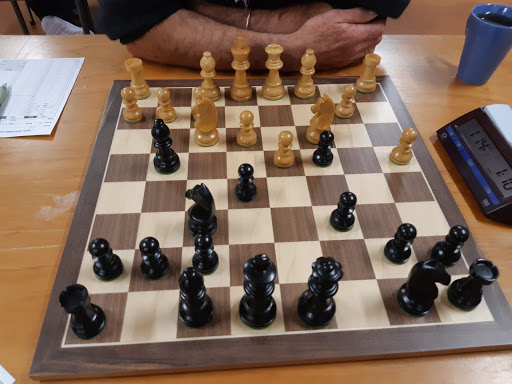