The annual Club Championship had its third round this week. Just Ross remains undefeated after 3 games, with a win over Andy this week. Levi is second on 2½ with a win over Geoffrey this week, and Andy makes up the leader group in third place on 2 points. Full results and standings can be found here.

Special mention to Andrew and Levi who travelled down to Invercargill last week to play in the South Island Championship. Both held their own against a strong field putting in solid 50%+ performances. Tournament results here.

A reminder too, that Term 4 in the Junior club starts next week at the usual time of 6:30. 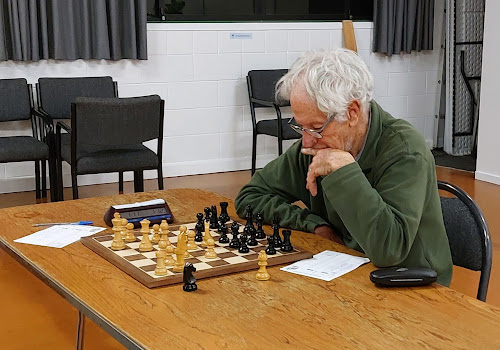 This week’s photo shows long-time Life member John Whibley in action in Round 3. John joined the club in 1988 and has been a loyal member every one of the 35 years since then.  In the longest game of the night this week, John showed he is still more than competitive playing flawless defence against a strong London kingside attack from David, and then gradually playing himself into a winning position. But in Chess it sometimes only takes one mistake, and it was David who came away with a lucky win. For more club pics see here.