A fun final night of the year for the Kapiti Chess Club this week, where members, family and friends got together to celebrate the year with some food, casual chess, including the traditional Club Champion simul against club members, and of course the main event,  the formal prizegiving awards for the year. Click here to see photos from the night.

Congratulations again to all our winners, and thanks to all our members for a successful 2019 year. See you in 2020! 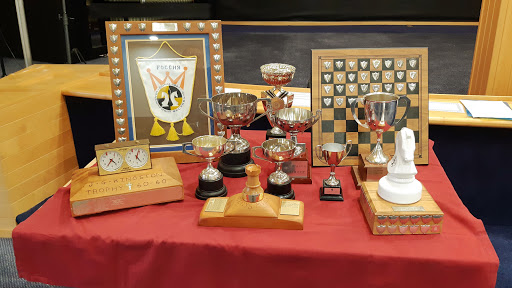 The final round of the Club Championships was played this week, and we now have confirmed winners for 2019. Congratulations to the champions in each of our grades.

Gordon Lyall backed up his win from last year to retain the A grade title for another year, half a point ahead of Ross Jackson. Geoffrey Gunawan takes out the B grade, having shown some impressive improvement over this year. While amongst the younger ranks, Mark Summers has also been in great form and despite missing three rounds,  takes this year’s C grade winning all but one of his games.  This link here features a nice win of his from Round 11.  Full final results of the 2019 Kapiti Chess Champs can be found here.

That now wraps up formal games at the Club for this year. Next week is prizegiving, supper and the traditional club simul against the Club Champion. Please bring some food, and friends and family are very welcome too.  See you there!

Round 11 of the Club Champs played 3 December 2019. Mark Summers wraps up the C Grade and the Gufeld Trophy for 2019 with this stylish attacking win in 17 moves.

In this post, we go back 30 years to September 1989, when New Zealand FIDE Master Johnathan Sarfati visited the club at their Kapiti College clubrooms to give a talk and play a simul against club members. Sarfati at the time was one of New Zealand’s leading players, including having won the 1987/88 New Zealand Championship.

One of our current members, John Whibley was even there and is shown playing below. No records remain of the results, including if any club members were successful in their game. John also declines to say whether he won or lost!

Johnathan followed this up in April 2003 with a repeat visit to the club, this time playing an 11 game  simul, and winning all 11 games blindfolded!! Here is an account of that event from former member and club champion Earl Roberts (Chess from behind a blindfold, from NZ Chess 29(3) 2003, page 23). He returned again in February 2016 for another simul, winning 9 from 10.

If you are interested in seeing other photos of the early KCC club days from the late 1980’s and 1990’s click here.  We’d like to develop this history further, so if you have any photos, articles or stories you’d like to contribute to our club’s online history, we’d love to hear from you.

In what potentially might be the deciding game for the club champs this year, the two front runners met this week in Round 10 m, with Gordon Lyall winning in good form over Ross Jackson to take a half point lead with 2 rounds to go. With the rest of the pack not now able to overtake, it’s going to be interesting to see what happens for these top two places in the next two weeks.

Meanwhile, Geoffrey Gunawan firmly sealed the B-grade with a win over John Whibley, and in the C grade, Valera Bonyushkin upset current front runner Mark Summers to close up the gap in the leading pack. Going into the final two rounds, there are four potential winners. Mark has 7 points from 10, Hamish Lester has 5.5, and Valera, Rick Lowe and Liam Parkes are just half a point back on 5.

Watch this space to see who will come out on top.

Round 9 of the Club Champs this week saw Ross Jackson and Gordon Lyall both come away with wins,  and with 7.5 and 7 points respectively, and three rounds to go, they now have an almost unassailable lead over the chasing pack back on 4.5 points.  In the B grade, Geoffrey Gunawan cemented his name on the Ab Borren Trophy with a win (well done Geoffrey!), while in the C grade, Mark Summers continued his great form of late with another win to take his total to 7 from 9, and a step closer to getting his name on the Gufeld Trophy. See all the latest results here.

Below: In the longest game of the night this week, David Scott and Guy Burns face off again in tight battle (see game here).

The competition for the best Kapiti Chess Club players for 2019 moved into Round 8 this week, with some interesting and close fought battles on Tuesday night.

On top board, Ross Jackson and David Paul fought out a close draw, while Gordon Lyall defeated Geoffrey Gunawan on board two. Guy Burns eventually overcame Brandon Holman in an endgame with rook and pawns, with each side queening. John Whibley and David Scott (with only 1 NZCF rating point  separating them), fought out an interesting game, with David not being able to capitalise on his early space and activity against some good defensive, equilizing, then attacking play from John to eventually win.

At the two thirds stage of the competition (8 rounds), Ross currently leads the A grade,  just half a point ahead of Gordon, with David Paul and Guy in third, a further point and a half behind. In the B grade Geoffrey leads of Brandon, but with 4 rounds to play.

In the C grade, Mark Summers has now established a clear lead ahead of the rest of the pack with a nice win over Rick Lowe this week. Hamish Lester is second, leading a tight chasing pack with Rick, Liam and Valera.

Full results are here. With four rounds to go, and every place still up for grabs, there promises to be  are some great match ups ahead.

This week the club took a break from the serious chess of the recent Club Championships for a final night of fun Blitz. In fact, this was the third of three nights played over the year that go towards the Club’s Blitz Cup. Players play with 3 minutes each, plus 2 seconds added per move, and games go on until everyone’s gone home or no more pairings can be made.

Congratulations to the clear winner on the night, Gordon Lyall, with a perfect 7 wins from 7. Second was David Paul on 6, followed by Guy Burns on 5. Top Juniors were Geoffrey Gunawan and Valera Bonyushkin on 3.

And so, combining results with the earlier two Blitz nights, the overall joint winners of the 2019  Blitz Cup are Gordon Lyall and David Paul. Congratulations to both! Full results here.

Below: After the successful introduction of the NZCF Juniors Badge Scheme earlier in the year, the juniors were at it again this week being tested on their chess knowledge to see if they can gain their next level badge. Good luck! 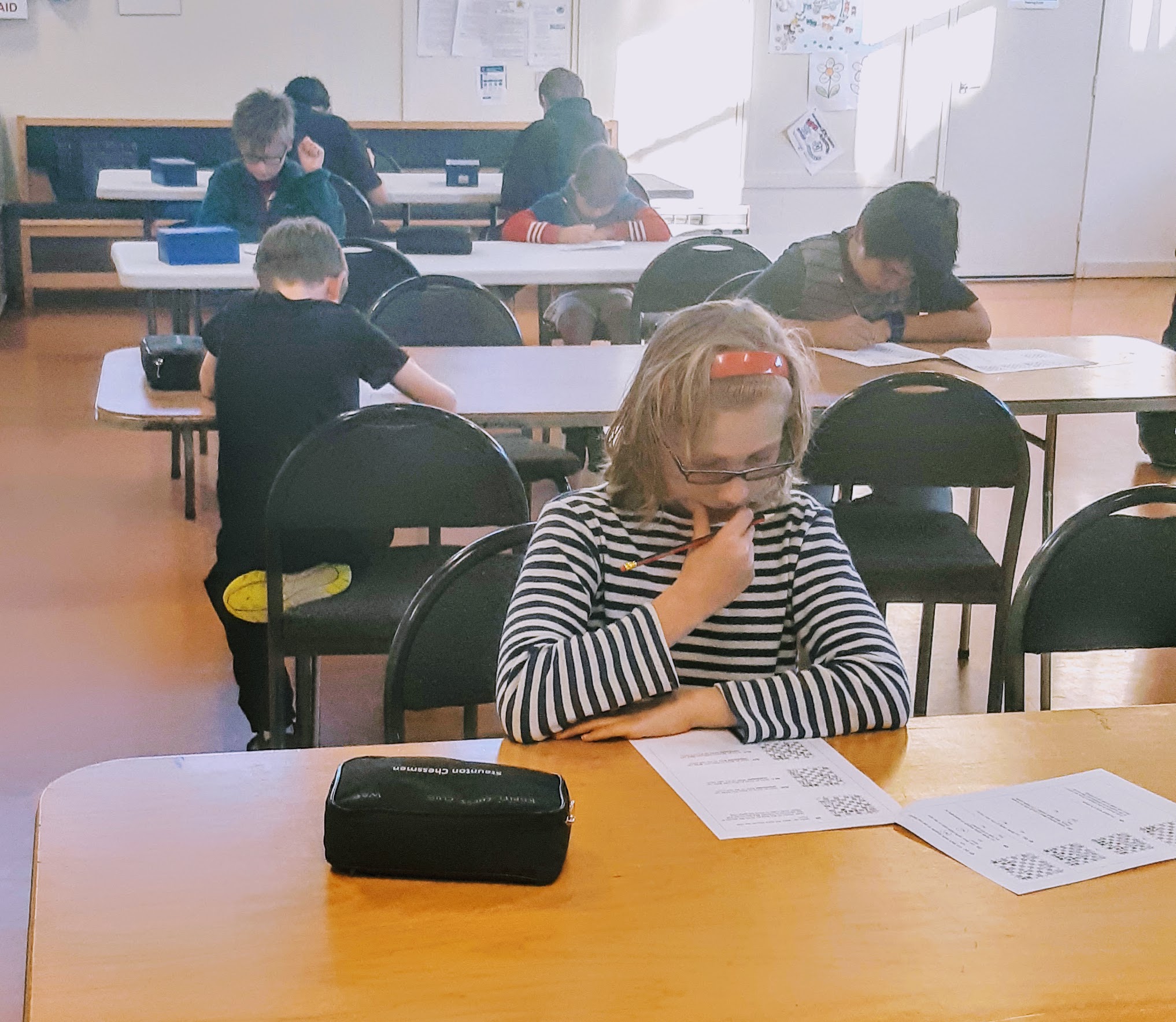 There’s been some great match-ups and after six rounds, Ross Jackson is currently leading the A grade with 5 points, ahead of 2018 Champion Gordon Lyall on 4.5. Guy Burns is currently third on 3.5, including an early round upset over past champion David Paul. Geoffrey Gunawan, on 3 points,  is currently ahead of Brandon Holman for B grade prize.

There’s much interest and action in the C Grade tournament which this year has been separated from the A and B grades in an attempt to reduce  mismatches and make it more enjoyable for  members. After 6 weeks, Mark Summers and Hamish Lester are joint leaders on 4.5, followed by Liam Parkes on 3.5. However, with an encouraging growth in new junior members and visitors in recent weeks, the front runners will need to be on their toes for the final half of the champs.

Latest results can be found here.

The club has a short break next week with the third and final round of the Blitz Cup. The second half of the Club Champs with the final 6 rounds will follow this.

There was a great Round 6 match between Brandon and Gordon. Brandon showed some great competitiveness against the much higher-rated Gordon, taking him to the last game of the night to finish. In the end, there was excitement and elation as he announced mate, only to be followed by dismay when he realised  he was already in check, and in fact heading to a lost position a few moves later. See this game here.