Paul Frost kept a cool clear head, in the John Kingston Memorial Trophy, to beat David Paul in a finish that was down to the wire — a couple of minutes were on both clocks — Paul maintained his composure and confidently Queened his pawn and it was soon all over for David, who tenaciously played briefly on, trying for a forced draw. 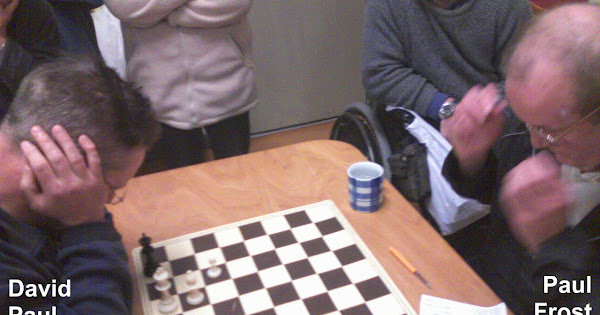 Paul Frost (right) prepares to rapidly launch his f pawn to queendom, then onto mate,
much to the consternation of David Paul (left).

Paul and Zoe Kingston lead the field, by a full point, and their games will be closely followed next round. Glenys Mills had a noteworthy win against Tim Roberts. In the Reserve Grade Rick Lowe, on six points, is pulling ahead of the field, as former co-leader Tricia Benny, five points, was absent. Two more rounds remain for this Trophy Tournament. Next, a blitz night will be held, and then the Club Championships will start — the format of this contest will be announced soon.