Kapiti Chess Club finished the year with a prize-giving night on 16 December 2009.
We commence play for 2010 on 3 February—see above.
The Committee will meet towards the end of January to discuss the format for the 2010 Chess Calendar.
From the Kapiti Chess Club Team we wish everyone a wonderous holiday break and blessed New Year.
Share on FacebookShare on Twitter
Permalink

All official club games are over for the year and we will be playing some casual chess, perhaps some 15 minute tournaments

Come along for the last few nights of 2009 at Salvation Army, and don’t forget our prize-giving to be held on 16 December:  ALL people are welcome and bring some food for our celebration of Chess in Kapiti.

We have winners!  The Kapiti Chess Club’s Championships are now over.
Results:

Congratulations to all players who participated in this exciting tournament.

On 25 of November the last round of the 5 minute Blitz Tournament will be played.

The Kapiti Chess Annual Clubs Champs are drawing to a close. There are three more rounds for the B and C grade players, and the A grade has several catch up games—see below. Johnny Hynes is well ahead on points to take out the C grade. The B grade is a battle between Rick Lowe and Christy Paul, closely pursued by a pack of three players. David Paul appears to have taken out the A grade with an insurmountable eleven and a half points. His nearest contender David Sosnoski needed to defeat Guy Burns last week to have a chance of beating David to the trophy. Please note these points/results are tentative and are yet to be triangulated by Club officials—see below for detailed results

Sunday 20 September 2009. A field of 38 players ensured the annual Kapiti Rapid 6 round tournament was another success. Anthony Ker wiped the field clean with an impressive 6 point sweep—perhaps his most difficult game of the day was round one against the mighty Kapiti Chess Club battler, Mike O’Rorke who played a brilliant 62 move game with some draw potentials? Junior Alan Ansell and Wellington’s Ross Jackson  played above their weights and finished with an impressive 4.5 points, along with Edward Lee and former Kapiti player Martin Hill.

Kapiti’s David Paul and Dennis Sosnoski kept the top B grade prize in Kapiti’s hands for a second year running with 3.5 point finishes. Junior Ryan Hill also played well in this grade with 3 points along with Kapiti’s Mike O’Rorke. Argentinian Sebastian Manzt supply of Mate tea possibly helped him to also finish with 3 points in the B Grade.

The Junior prize was shared by Ryan Lee, Pasan Pahalawatta and David Kweon—names to be watched closely as future champions maybe?

View Photos From The Event

It’s hard to determine which game was the biggest upset of the current Club Champs:
Christy Paul’s shock loss to Brian Seddon, or Mike O’Rorke’s win over Dennis Sosnoski. They are both, significant, as far as 2009 upsets go.
In the B grade, David Seddon is now equal with Christy Paul on the points table, closely followed by Rick Lowe and Dave Seddon.
Johnny Hndes, comfortably leads the C grade.
David Paul’s lead in the A grade has been helped by Mighty Mike’s win against Dennis. There are still two catch-up games to go, in this grade for Dennis, against Guy Burns and Zoe Kingston, before final points can be determined.

Christy Paul faced his nemisis—Rick Lowe—keeping his cool, came away with a finely deserved win, arguably the winner of this game will be the winner of the 2009 B Grade title, as both players have been running neck and neck. Johnny Hynes continues to dominate the B grade. The game to watch in the A grade was between David Paul and Dennis Sosnosky—a gargantuan match—which ended in a draw, though both players had opportunites through the game. Mike O’Rorke continues his fine form and managed a draw against the tenacious Tim Roberts. Perhaps the ‘get out of jail’ card was handed to Guy Burns who scored an unexpected victory over Zoe Kingston after a shocking start.

Next week (02 September) the A grade will play out the last round of this series, and the B & C will contine their combined Swiss Round games.
09 September will be a catch-up night for the A grade. B & C will by as per normal.
16 September all the grades will begin a new series of games for the Club Championships.

There’s still two rounds of the A Grade Championships to go—series 1 of a double-round-robin. Then there is a break between series—a chance for players to catch-up on any games they’ve missed. Series 2 for the A Grade starts 10 September. The B and C grade Champs are now well under way, next week is Round 4 for this Swiss based Championships.

Share on FacebookShare on Twitter
Permalink
Kapiti Chess Club has a Grand Prix Tournament based on all competition games played during the year—including the blitz tournaments. Here’s the results, up the the last Blitz tournament played on 29 July. There’s still Club-Champs and one more Blitz round to go before the winner can be determined.
Share on FacebookShare on Twitter
Permalink

Club champs continued with strong competition in all grades. Next week will be a catch-up night for the A grade for those who have missed games. 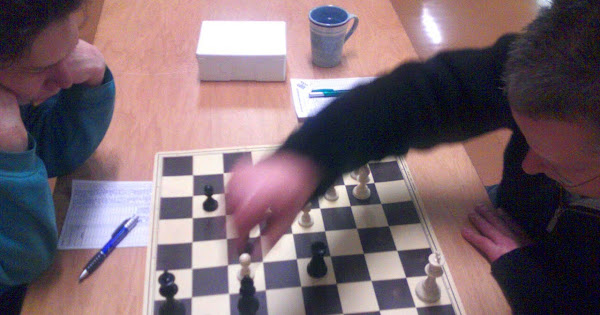 Zoe Kingston (left) looks cautiously on as David Paul is about to move Rook to g2, Check! Next move, take the Bishop—game over, Rover.