Junior members commenced the Term 3 rapid chess competition last night. Devin and Lucas are the only players with a perfect 3 points from the first three rounds. Yonatan is a half point behind, followed by Amy, Charlotte, Jingwei, Orlando, Ronan and Jed, who all have 2 points. The field consists of 21 players representing 8 local Kapiti schools. The tournament will run till the end of the current term, with a further 6 rounds to be played. 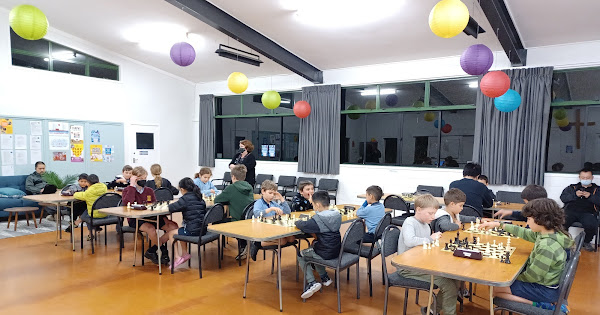 Meanwhile in the Senior Club, we ran a Gambit night last week (results here). A gambit is where one player will deliberately offer up some material, usually a pawn, in the opening moves of a game in order to try and get some other kind of compensation, such as a positional advantage in the centre, or sometimes just to throw their opponent off from their opening knowledge. There are hundreds of known chess gambits (see a list here), including one of the most common or well-known – the Queen’s Gambit. 1.d4 d5. 2.c4.

Coming up soon will be the final leg of the Blitz Cup, with the Club Championships starting in early October.